Seaside Drifters is a local community band from Mijilmilmia approximately 170klm’s south of Broome. All the members hail from the Karajarri tribe and they are a party band who gives great rock n roll and reggae music. Originally formed in Darwin whilst at St Johns School.

Seaside drifters is made up of local boys from a isolated community, they are all family and have a very good demeanour and outlook on life. The band performs originals and also covers and is fully capable of filling a complete evening of a standard rock venue trading hours. Their repertoire is very big and the boys have a great sense of fun, enjoyment and entertainment ship.

The band is now endeavouring on recording their very own album in the very near future and has a healthy list of originals. The band is well loved within the community and despite the isolation is very well rehearsed and prepared to hold their own as a professional working band.

The band has been around for 10 Years and have a large following throughout the Kimberley and the Pilbara. A crowd drawer whenever they play. Seaside Drifters have performed and travelled to most community festivals, events and have a backlog of private functions gigs that would not fit on a list.

Seaside Drifters are made up of a standard line-up of Drums, Bass and guitars. It has at times also worked with a keyboard player when required. The band members are led by a very charismatic lead singer and guitarist Mr Patrick Shovellor who is the heartbeat of the band. His good looks, great smile, great voice and great guitar skills allows him to take the lead role in the band. On Drums is Mr Nathan Shovellor and on Bass guitar is Damian Spratt. The band has the potential of being another historical great band hailing from the Kimberley, if not already.

Their name reflects their connection to country, the sea and the associated hunting and gathering lifestyle. 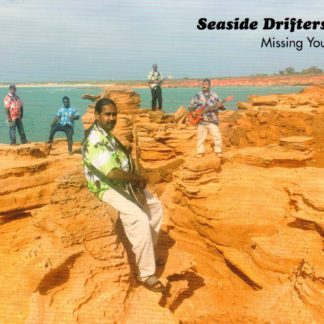